to our legendary mountain wilderness

In 2006 Harz became the first National Park in Germany to cover two federal states; the eastern part in Sachsen-Anhalt consists of 8,900 ha of land and was set up in 1990. In 1994, the federal government of Niedersachsen established the western part of the park, covering 15,800 ha. As a result, the united Harz National Park consists of approximately 24,700 ha. The Park is part of Natura 2000 – the European nature conservation – network.

Harz National Park stretches from a low mountain range near Herzberg in the southern part of the mountains, across the Harz massif to its northern slopes near Bad Harzburg and Ilsenburg. It offers the entire range of characteristic ecological systems, variations in height, slopes and rocks. Height varies from approximately 240 m in the north and 270 m on the southern edge up to 1,141 m on Brocken peak. The Park offers an ecologically complex landscape and contains different vegetation zones. 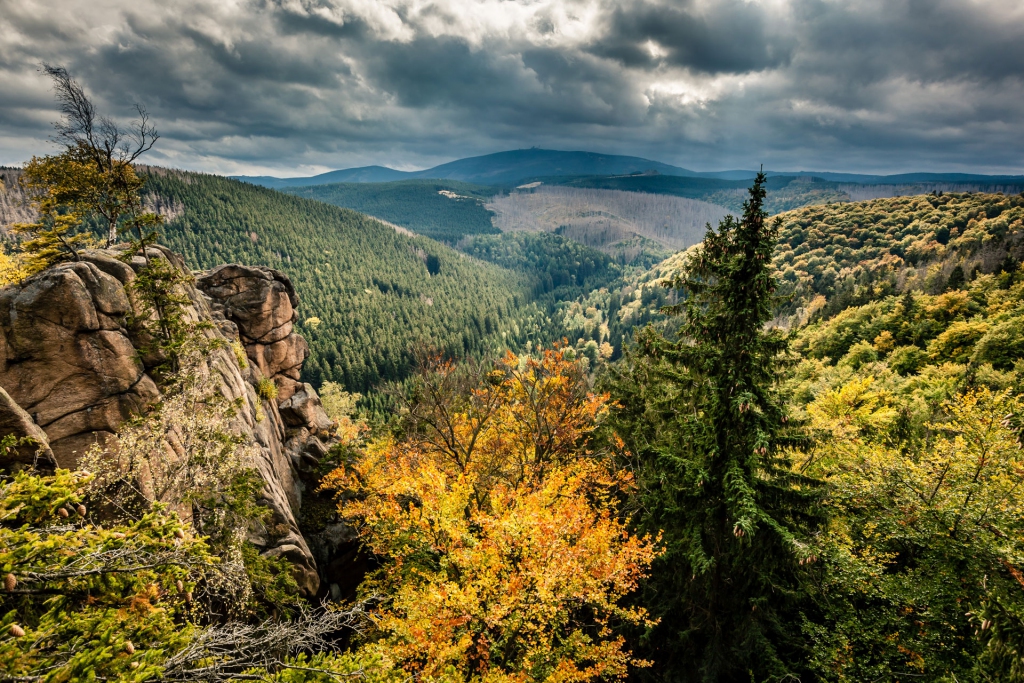 View to the Brocken - the highest mountain in the Harz (Photo: Mirko Lehmann)

Harz National Park is virtually uninhabited, but does contain some settlements. Nearly all the land within the Park is forested and belongs to the federal states.

Scientific research has identified numerous habitats which are, based on Middle-European standards, quite close to a natural state, such as the high and middle regions or zones of the Harz, rocky biotopes, many running waters, and a large beech, spruce and mixed forest area. In some sections, however, ecological changes in afforestation must be carried out in order to get closer to original, natural forest conditions.

One of the priorities in the future for Harz National Park is carrying out environmental information and education services. With its geographical location, beautiful landscape and characteristic natural environmental setup and layout, the Harz National Park region is one of the most significant recreational areas in Central Europe. The Harz Tourist Federation calculates that there are more than five million overnight stays and approximately ten million visits to the Park area and its adjacent towns a year. A group of 39 rangers and several National Park Visitor Centres contribute a great deal to the services for the visitors.